LUNAR LIGHTS ON A HOLLOW MOON?

If the music behind the moon gave you the creeps, I don't blame you - but I doubt it would have been the single reason for NASA not returning to the moon in over 40 years. After all, 12 men actually walked on it's surface following that.

Over the past year, I have discovered that there are many mysteries in which NASA and the moon share. I've already provided some evidence of NASA obscuring certain elements during the Apollo Missions (more below) - but were they already aware and prepared for spooky things being seen or heard on the moon before the Apollo missions were even launched?

Strange lights and objects have been recorded on our moon for hundreds of years.  In 1787, legendary astronomer, Sir William Herschel, recorded strange lights traveling across the dark lunar surface.  On one particular occasion of that same year, he spotted 3 red lights in the darkness of the lunar surface, describing the brightest one as being brighter than a recently discovered comet. He also believed there to be large "lunar cities" within the moon's craters and strongly believed in extraterrestrial life - something almost  laughable during the 18th century.

The classical Greek philosopher, mathematician and scientist Plato also reported anomalous lights on the moon sometime around 400 BC.  There is even a crater named after him which experiences high volumes of 'transient lunar phenomenon' - a term that NASA uses to describe these spooky lunar lights.  Between the years of 1540 and 1967, over 570+ lights and flashes were recorded over the moon's face.  While NASA and other lunar scientists attribute these moving and flashing lights to outgassing and impacts - few reports concerning these phenomena are ever published in peer reviewed scientific journals and are rarely ever discussed among the scientific community.

So could great historical minds like Sir William Herschel have been correct?  Could it really be possible for a race of extraterrestrials to have been living on our moon for hundreds or thousands of years without public knowledge on Earth?

There are several official NASA photos taken throughout it's lunar expeditions which often depict some extremely large, artificial-looking, structures on the lunar surface.  Some of these structures have been estimated to be several miles tall.

However, NASA has tried their best over the years to blur and obscure many of these structures.  Often their attempts are extremely blatant. 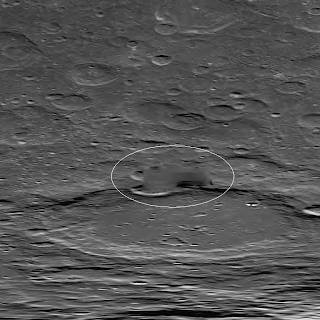 So now we've got some evidence of moving luminous objects and large structures on the moon's surface, and furthermore, that NASA is trying very hard to hide and explain away these things.  But what else can we look at?  How about the moon's interior?  If an extraterrestrial race is hiding on the moon, wouldn't the interior would be the safest and most reclusive spot to hide?

"...according to an analysis of the moon's motion, it appears that the moon is hollow: if the astronomical data are reduced, it is found that the data require that the interior of the moon is less dense than the outer parts. Indeed, it would seem that the moon is more like a hollow than a homogeneous sphere."

"The astounding result of that crash: The moon rang like a bell for nearly an hour, indicating some strange and unearthly underground structure."

In that same article, published a month before Apollo 13's failed lunar landing, von Braun goes on to say;

"An Apollo 13 "spectacular" will be the meteor-like crash on the moon of the great Saturn V rocket's whole top stage and instrument unit, totaling more than 15 tons...

...This will be a dramatic scale-up of the Apollo 12 experiment."

Indeed it was. Despite technical malfunctions preventing the Apollo 13 crew from landing on the moon, they still managed to carry out the task of crashing the Saturn V third stage rocket (S-IV B) into it.

This time the moon rang out for over 3 hours!

Back at NASA headquarters in Houston, CAPCOM made this remark to the Apollo 13 astronauts after impact;

"Aquarius, we see the results now from 12's seismometer. Looks like your booster just hit the Moon, and it's rocking a little bit."

However more recently, based on new 'state-of-the-art' seismological analysis of  the same Apollo-era data, NASA has concluded that the moon is not hollow - but rather has an 'Earth-like core' made up of mostly mantle with a solid inner core surrounded by a fluid outer core.

So why then, did it ring like a bell for over 3 hours!?

Many scientists opposed to the idea of a hollow moon argue that the lunar crust would have to be extremely dense in order to support the theory - based on the behavior of objects interacting with the moon's gravitational field.

This is something that makes sense - if you are thinking in context of the moon being a 100% natural body. One thing you have to take into account though, is that scientist to this day still have no solid claims as to where the moon actually came from.

Is it possible that it was once a natural celestial body that was hollowed out into various cavities with massive tunneling systems? Could that help to explain the highly anomalous mass concentrations of gravity (mascons) throughout the moon?

New evidence discovered in 2009, confirmed a network of underground tunnel systems, which would be ideal for human habitation.  Arizona State University's lead researcher on the topic, Mark Robinson, had this to say;

"They could be entrances to a geologic wonderland... The tunnels offer a perfect radiation shield and a very benign thermal environment..."

In 2010, NASA released a series of images taken by their Lunar Reconnaissance Orbiter (LRO) which displayed the moon's topography in never before seen clarity and detail.

I can't help but notice how similar our moon looks in comparison to a metal-plated ball covered in dust that's been sprinkled with water.  Not much variation of crater depth - as if something below the dusty surface is preventing much impact damage to the inner-exterior & interior.

Does all of this truly indicate that the moon is a partially artificial object inhabited by an extraterrestrial civilization?  I would once again like to point out that we haven't been back there in over 40 years.

So where does this leave us?

It's becoming increasingly obvious that someone doesn't want us to know the whole truth.  But why?  What does NASA know about the moon that we don't?  For starters, NASA knows, at the very least, that extraterrestrials are visiting Earth.

How do I know this?  Because NASA astronauts told me so.

If multiple former NASA astronauts are admitting the presence of extraterrestrial life on and around Earth - why are so many people still clueless about it today?

Apparently, NASA wants to distract us from our own Earth and moon.  They would like us instead to focus on another celestial duo.  Freemasonic NASA spokesman Buzz Aldrin explains:


...and what else have we recently learned about Mars' orbiting celestial potato?

All of this evidence ultimately seems to be going in one very bizarre direction...


...Was our solar system invaded by artificial 'moons' in ancient times?